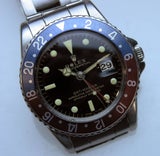 The GMT Master, a timepiece in need of little introduction, has one of the most unique pedigrees among the world of wristwatches. First produced in the late 1950s, the GMT Master was conceived under the idea that pilots should deserve their own tool watch -- divers had the Submariner, mountaineers had the Explorer, and linemen had the Milgauss. A gap in the market was spotted, and Rolex went to work. First contracted by PanAm Airways, the early GMT Master sported a simple red GMT hand, a small date window, and the infamous blue and red colorway to serve the PanAm clientele. This configuration is now known as the "Pepsi", and since the days of servicing primarily airline pilots, Rolex has expanded its designs to encompass several different colors, sizes, and features.

We offer a genuine 1964 GMT Master, pictured above, that contains originality in its bezel, dial, hand set, case, and bracelet. This particular reference, the 1675, sports a riveted Oystersteel bracelet, marked with the appropriate serial number that dates it to 1964 as well. The movement, a calibre 1570, was created in the fledgling stage of GMT chronometer grade automatic calibres, and as such, has a uniquely rugged, simple, and straightforward design. The dial is a glossy black with gilt lettering, offering original luminous markers, that remain untampered and patinated. The bezel is a traditional aluminum insert, sporting vertical streaks among the paint to display its true age. The crown guards are tapered and unobtrusive, making this design particularly unique among the lineup of other reference 1675. The final notable future to this timepiece is the cycloptic date window, patented by Rolex, and introduced first on the GMT Master 6547, the predecessor to the 1675.

Sold Out
Add to Cart